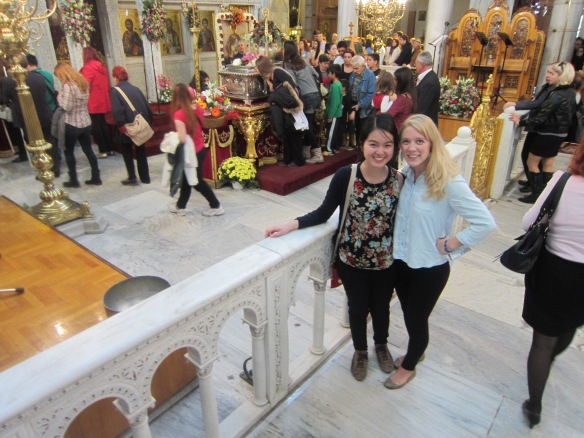 This weekend I took a trip to Thessaloniki with some colleagues. I visited an excellent museum that ‘broke down’ the history of the Byzantine empire. I saw a lot of great Orthodox churches, many of which are UNESCO heritage sites. This picture is inside the church of St. Demetrius, a famous Orthodox military saint from Thessaloniki who is put to rest inside that very sarcophagus behind us. People were lined up all the way down the aisles to kiss and touch the sarcophagus. It was really interesting to watch people in such a personal and intense act of devotion. I’m Catholic, but I can’t really relate with this one. This day was a national holiday, so it was particularly packed in the church. I also drank OUZO, which is a crazy strong alcoholic drink made in Greece. It tastes like licorice and makes you wince after you take a swing. Cindy and I decided to check out the night life on Saturday. After hanging out at a club called “The Bedroom” and “Dogs” for four hours we found out that the Greeks’ idea of clubbing doesn’t involve a dance floor until 2am…..so we unsuccessfully returned to our beds at the Holiday Inn. 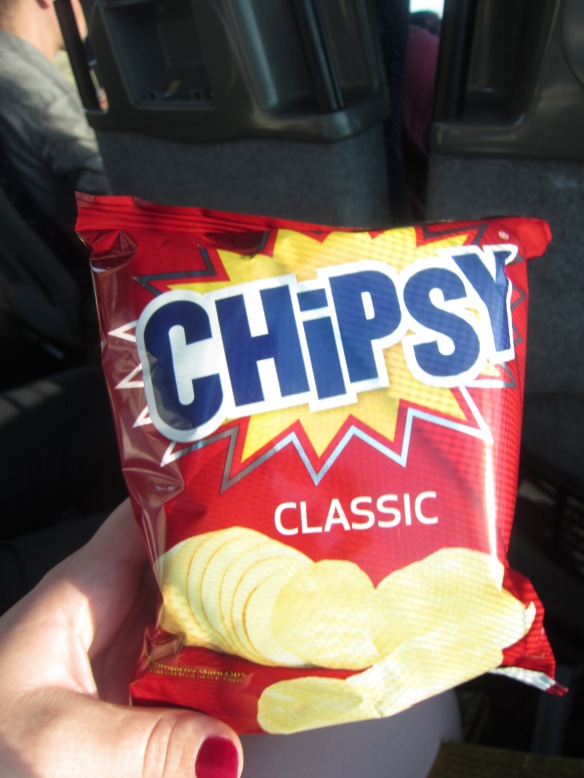 Serbian potato chips are quite ‘chipsy’. I don’t think they come any more ‘chipsy’ than this. Lays has some competition.

The first night I spent in Kosovo, I woke up at 6am to a loud ‘mish-mash’ of middle-eastern-sounding music playing in unison on megaphones throughout the city. I opened my eyes in the darkness and I thought to myself, “what in the world is that?” There’s a name for this event, which happens 5 times a day. It’s called the ezan or call to prayer. It lasts only for a couple minutes but the echoing can be heard throughout the city at every mosque in the center, on the outskirts of town, and in the villages and suburbs. The call to prayer is when the Muslim priest, or imam, sings into a microphone from inside the mosque that amplifies his voice over speakers connected to the tower (minaret) on the outside of the mosque. It signifies the time when fellow Muslims should start entering the mosque because prayer is about to begin. The above video is taken in Prizren. This is what I hear everyday, 5 times a day! 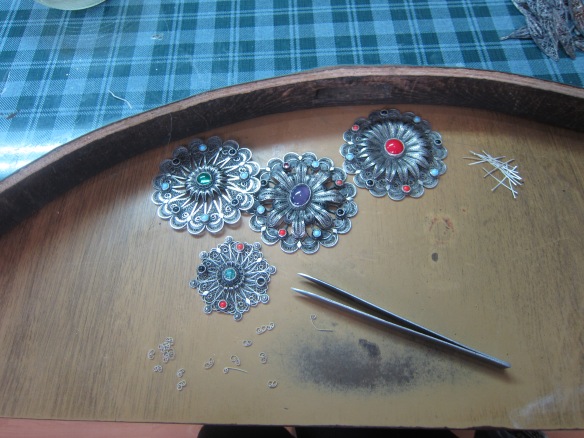 My first lesson in making filigree jewelry entailed delicately curling paper-thin silver wire by hand for exactly one hour. I’m starting with the basics. In the photo you can see some beautiful finished filigree work, which unfortunately isn’t mine. Instead, that small pile of curled wire is all the progress I made today. I never knew there was so much exactness required in curling wire. My first few tries, I got a rating of 2. Then, by the end of my lesson, my wire-curling reached a 4. Not bad. Next time I’m shooting for a 5! 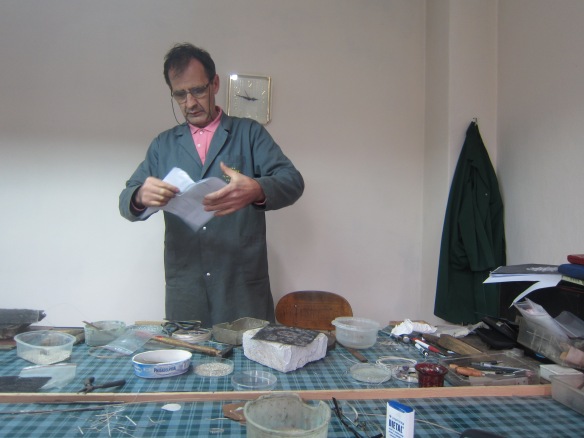 Filigree, or filigrani as its called in Kosova, is an ancient craft that uses fine silver to produce intricate, lace-like works of art. Filigree’s origins date back to the ancient Egyptians, then being perfected by the Etruscans and ancient Greeks. Filigree arrived in Kosova in the 15th century and it’s been produced in the region by hundreds of artisans ever since. Among the largest and well known of these artisans is a group of 9 producers working together in a small workshop in the northwest part of Prizren. Simply called Filigrani, the company was originally formed in 1947 by the Yugoslav state together with local craftsmen. During this time, Filigrani had over 130 jewelers in one building. The company survived many hardships before being forced to close after the privatization process that came after the war in 1999. The remaining group of 9 now work out of the original building, producing truly exquisite work for clients at home and abroad. I had the opportunity to visit this historical workshop today. Depicted in the picture is Filigrani’s head designer at his workbench. He showed me some of his current projects for the Serbian Orthodox Church, including filigree crosses and intricate hanging candle holders studded with gems. He assured me that everything was made by hand and he even offered me a workbench where I can come practice making filigree jewelry everyday! 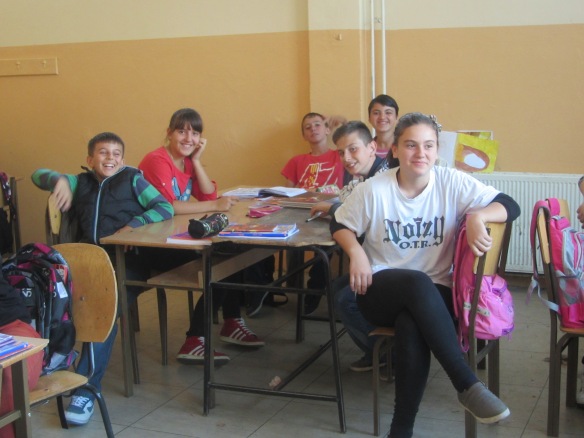 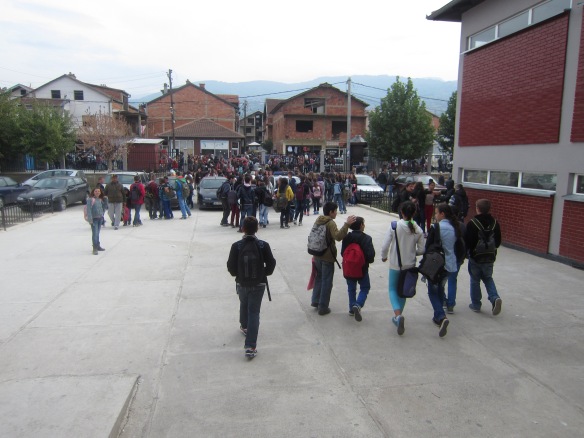 My second week teaching English at Leke Dukagjini went well. The students really enjoy having me in class. Every time I walk in the classroom, they all jump for joy and say “YES! New teacher is with us today!” I’ve been rotating between 7th and 8th grade classes, and everyday I teach up to 5 English lessons to separate groups. An activity that was a big hit was listening to a jazz song by Duke Ellington, “Take the A Train,” and filling in the blanks to the missing lyrics. I explained how jazz started in Harlem and I showed them on a map where the A train was. At the end of class, everyone was singing the lyrics as they walked out the door. I also did an activity in which they planned their “dream vacation” and had to practice the ordinal numbers by presenting their travel plan in front of the class. Many of the students said they plan to visit me in Minneapolis….that was really cute. I also did a presentation on the culture of Texas. I think most of the 8th graders know about the Texas Longhorns and a BBQ. Many students now say “Howdy” to me when they see me in the halls. So far, the students have been really enthusiastic and I’m excited for the next week of teaching!

Here in Kosovo, people introduce themselves as “Hi, my name is Burim. It means ‘the source’ in Albanian” or “Hi, my name is Shqipe, it means eagle in Albanian.” Whenever you meet someone in Kosovo they will tell you their name, followed by an explanation of its translation. The first time I met my landlord, he immediately told me what his name meant in Albanian and proceeded to tell me what my name meant. During English classes at school, the teacher couldn’t call on a student without translating their name for me. I walked into the tourist office in town and the woman introduced herself as “my name means snowflake.” At first I was confused and I thought, “What’s the deal with names here? Why does everyone feel the need to tell me what their name means? And why do they name their children with Albanian nouns to begin with?” It was a strange concept at first because in the US, people name their children Brittany, Ashley, Brent, or Kyle and there’s no meaning. After I asked a friend about it, everything made sense. She told me that throughout history, the Albanian people in Kosova have always been ruled by other empires, countries, or dictators. They’ve always been told that they don’t belong here nor there; They don’t belong in Albania nor in Serbia. They’ve never had a true sense of place. The names, therefore, provide a connection to the land and the culture of Kosova. Names provided a national identity and they’re very proud when they introduce themselves. The names even provided a way to secretly express themselves. I met a girl who was born during the war and her name is Liridone, meaning freedom in the hopes that by the time she was an adult, Kosova would finally be an independent country.